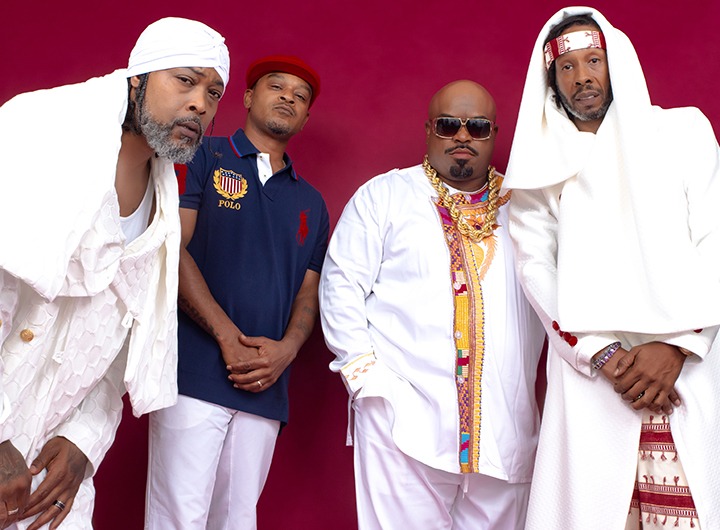 The annals of hip-hop history are replete with their fair share of legends. Many of these legendary groups have added tremendously to the development of the culture of hip-hop. But none of them have been as innovative, as incisive, as impactful, or as inspirational as the Atlanta-based, four-man lyrical band of brothers known the world over as Goodie Mob.

Consisting of Big Gipp, Cee-Lo, Khujo, and T-Mo, Goodie Mob first formed in 1991 as a vital part of the hip-hop collective known as The Dungeon Family, which consisted of Outkast, Witchdoctor, Backbone, Big Rube, Cool Breeze, and P.A., led by the multi-platinum selling production team, Organized Noize. Under the musical auspices of Organized Noize, the Goodie Mob became one of the few Southern-based rap groups to gain nationwide notoriety in the 90s. Most importantly, Goodie Mob is one of the few Southern rap groups aside from Outkast and the Geto Boys to earn respect from Hip-hop’s fickle fans and critics who count their 1995 debut, Soul Food, as among the genre’s best albums ever.

Unlike many of their peers whose music and memory have been regulated to the dustbins of hip-hop history, Goodie Mob’s music has stood the test of time. Their catalog, which consists of the power-packed LPs, Still Standing (1998), World Party (1999), One Monkey Don’t Stop No Show (2004), and Age Against the Machine (2013), is still reaching across the generations to inspire both young and old, alike. The many acts that draw inspiration from the Goodie Mob include Outkast, Future, Earthgang, Lil Baby, Big KRIT, and Travis Scott. Their music even inspired the late great Tupac Shakur to aspire to join the Goodie Mob at one time in his life.

“Tupac used to call our office before Suge [Knight] went and got him out [of prison],” recalls Big Gipp. “And he was like Gipp, man when I get out; I’m going to come to Atlanta and get down with the Goodie Mob. He always spoke about wanting to be and do records with the Goodie Mob, we just never got the chance to.”

Twenty-five years ago, significant magazines such as The Source, XXL, Rap Pages, Rolling Stone, and Vibe praised the Goodie Mob’s Soul Food for creating a masterful mix of soul, funk, gospel, and hip-hop along with cutting-edge, socially conscious lyrics that elucidates and inspires fans across the globe. And now, on its twenty-fifth anniversary, fans still can’t get their fill of Goodie Mob’s good ol’ fashion Soul Food. Unfortunately, many of the themes of mass incarceration, police brutality, racism, and political repression that the Goodie Mob addressed twenty-five years ago are happening today.

“We were fortunate as very young men to have been blessed with the type of foresight to try to inform and enlighten, but not necessarily speak these things into existence,” says Cee-Lo. “I would’ve hoped that people would’ve taken heed to our warning, then maybe we could have avoided some of what’s going on.”

Bettering the world with music is the thing that Goodie Mob does best. As the artists state, "It is no wonder that in these troubled times with racial tension at an all-time national high fueled by a megalomaniacal leader dog-whistling thinly veiled racist rhetoric amidst a deadly global pandemic," that Cee-Lo, Gipp, Khujo, and T-Mo have come together once again to offer the world healing in the form of their latest LP aptly entitled Survival Kit.

“The title Survival Kit came up after we finished the majority of the record,” explains Khujo. “A survival kit is something that you might need. You can put different things in a survival kit, so it doesn’t have to be the norm of what you think might go in a survival kit. With the times we’re living in now, you might switch up and have some hand sanitizer in there, some water, and some in food there. You probably have to have gloves and a mask. You gotta have a phone and a phone charger in there as well. But it can be a spiritual thing too.”

True to form, Survival Kit gives listeners all of the insight and inspirations they need and want. Organized Noize, the legendary production team, laced the LP with a heavy blanket of rock-solid beats steeped in the spirit of the soulful hip-hop sound that Goodie Mob fans know and love while new fans will be blown away by it.

The lead single, “Are You Ready” featuring the hard rhymer, Chuck D of the stalwart socially conscious rap group, Public Enemy, is sure to take a lot of people by surprise due to its fiery, aggressive, up-tempo beat augmented by fuzzy guitar riffs and chaotic sounds of police sirens -- which fit the hectic times we find ourselves in entirely. With “Are You Ready,” Goodie Mob challenges the listener to think about what it means to be living in the land of “haves and have-nots” and just what it will take to survive in it. It is an excellent kick-starter to the LP.

“For My People” is another track that stands out on the LP. The song is a robust musical toast to the many people putting their bodies on the front lines in the struggle for social justice. With its majestic horns giving the track a kind of Caribbean feels reminiscent of a classic reggae tune mixed with a heaping helping of Organized Noize’s sonic magic, “For My People” will surely emerge as a major fan favorite. The potent tune, “Frontline,” is another massive tune saluting those struggling for equity and justice.

“Right now, just seeing all of our people on TV marching and protesting and being shot at, bottles and stuff being chucked at the police, people burning down buildings and looting because we’re tired of all of the injustices,” explains T-Mo. “[We] just wanted to do something to let the people know that we care about them. We’re addressing them in the song, letting them know that we want them to unite and unify as one. This is our way of contributing to what’s going on.”

Indeed, in these seemingly apocalyptic times, when one needs a mask, gloves, and other PPEs to walk down the street, we must keep a sharp mind and an open eye to survive in these extremely perilous times. Survival Kit not only breaks down all of the challenges we are currently facing during this deadly pandemic, but it also offers us a glimmer of hope for a brighter day via a bevy of fantastic music. Survival Kit is essential listening for our time.