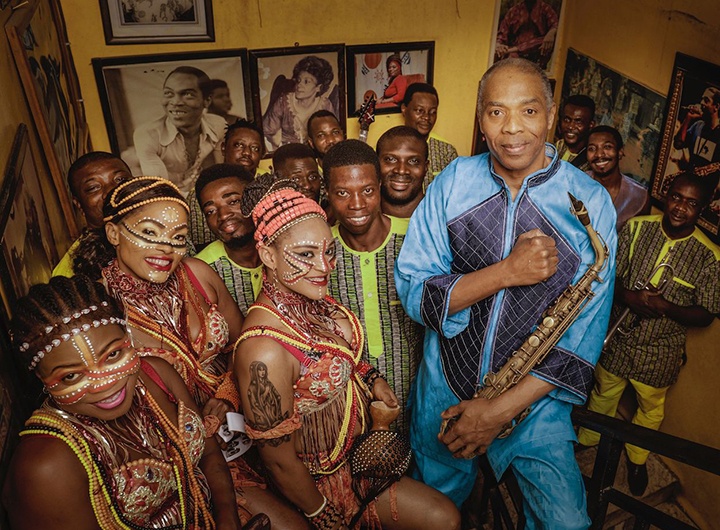 The indefatigable Femi Kuti never stops presenting his dynamic and colorful shows and committed political messages, whether from his iconic New Afrika Shrine in Lagos, or from all kinds of world stages and venues. 2021 allowed him to release the double album, Legacy + on Partisan Records which was so dear to his heart.

This box set containing his latest album Stop The Hate, together with the very first album For (e) ward from his eldest son Made Kuti.

Stop The Hate, radiates the unique Afrobeat sound that Femi has forged throughout his long career, affirming his sharply political convictions. The song “PaPaPa” and this album, which received rave reviews from the most cutting edge and prestigious international media, were nominated at the 2022 Grammy Awards.

It can sometimes be difficult to understand where he draws his energy as the countless fights for social justice he carries out are exhausting.

Fortunately, he met up with partners such as Global Citizen who defends the same causes and who recently broadcast his concert from The New Afrika Shrine as part of the 24-hour global concert they gave to the entire planet in September 2021.

Throughout the last few years, we have been able to watch Femi Kuti perform live from Cairo's stadium in front of millions of viewers, singing the official song of the African Cup of Nations, or hear him programmed alongside Jay-Z, Beyoncé and Ed Sheeran, while also seeing his name alongside heavyweights from the new Nigerian scene such as Davido, Tiwa Savage, or Wizkid.

Femi is widely in demand for many collaborations and worked on different projects with Coldplay, the electro music producer Robert Hood, and the French Hip Hop band IAM.

For the happiness of all, Femi and his troupe, The Positive Force, plan to travel the world throughout the year 2022 with their new show, promoting Africa at its best and promising breathtaking performance, full of surprises.

Femi Kuti grew up in Lagos, Nigeria, where at 15, he started playing saxophone in his father, Fela's band, Egypt 80. He was thrown in the deep end when having to replace Fela as head of the band when Fela was arrested at the airport and jailed just before starting a US tour. From that day on he’s never looked back. In 1986 Femi formed his own band "The Positive Force." His first record was released in 1995 by Tabu/Motown, and has followed a long journey since where he continues to expand the diversity of his artistry on most of his albums. He has received received a total of six Grammy nominations after having released a dozen albums. In 1998, to honor his Father, he opened the “New Afrika Shrine” where the famous seven-day ‘Felabration” festival now takes place every year, around Fela’s October 15 birthday.